KFC... for its slogan solution: The Drum editorial team’s best of 2020

It’s that time again, when we look back at the agencies, the brands, the organizations, movements and trends that have shaped the past year. In 2020 – a year so many of us would like to forget – our industry of problem solvers proved time and again that they have what it takes to muck in, help out, ask questions, shape cultures and change the world. It is them that we celebrate in our New Year Honors. 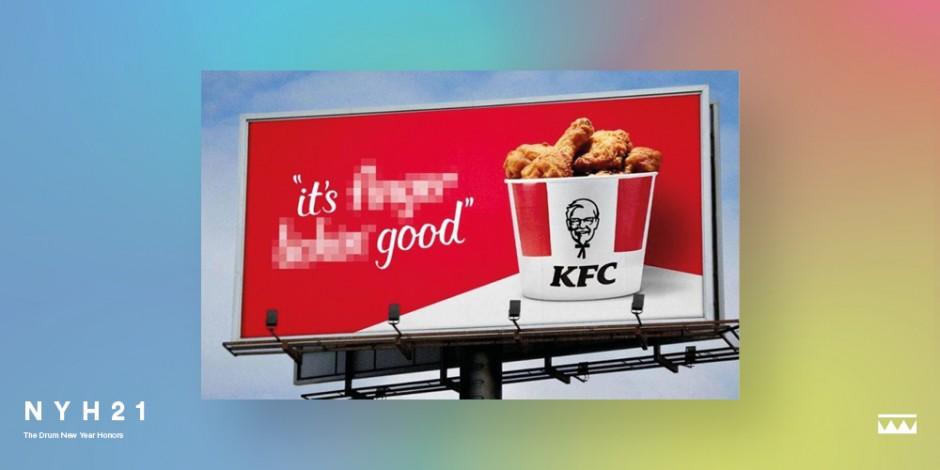 ‘That thing we always say? Ignore it’

KFC started off 2020 with Veganuary, when it adopted numerous meat-free options. It wasn’t alone in trying to capture the Gregg’s vegan sausage roll glory that earned accolades the previous year. So far, so good.

Then, KFC’s marketing plan went down the hatch. New ‘Finger Lickin’ Good’ KFC ads rolled out across the UK but were promptly killed. Overnight, the health crisis flared up and the public was encouraged to wear a mask, wash their hands and (importantly) stop touching their faces. It was the wrong message for the wrong time.

900 quick service restaurants came to a standstill, challenged with safely reopening as fast as possible. Delivery – via partners and apps – became a vital field of battle, while stores tailored for the reopen and hyper-local marketing announcing franchisee availability. Meanwhile, all of the promotion and wizardry in partners like Uber Eats and Deliveroo ticked away before a glorious above-the-line campaign from Mother after a nine-week break.

‘We missed you too, but we’ll take it from here’ acknowledged a campaign showing the public’s lovingly made if slightly wonky attempts to replicate KFC’s menu. Funny, emotional and smart (using user generated content while it had limited production capabilities), it was most importantly mouth-watering. Job done.

KFC would have had a good swing at a New Year’s Honour had it left things there. But it didn’t. It then acknowledged the fact its famous, long-lived catchphrase clashed with the public health advice of the moment. Instead, it ran a UK-led but global campaign censoring said catchphrase. ‘That thing we always say? Ignore it,’ read the print ad. Culturally relevant, in-built with a public health message, funny, leveraging decades of brand building and bravely staring a gaffe in the eye without blinking – what a campaign.

“We can connect the dots without having to say the whole thing,” almost boasted Hermeti Balarin, executive creative director at its agency Mother.

It was KFC’s first global campaign. It’s many market differ so hugely and have varying challenges and conditions that it is extremely rare to find a one-size-fits all campaign. But for the first time, multiple markets shared a common challenge – the lockdown. No nuance or localisation was needed.

It said: ’Yes, we’re back. We’re treading carefully around this pandemic. Bucket chicken will be back on the menu.’

Or as Balarin put it: “If you’re just aware of cultural context around you, the turbulent times that we’re going through right now offer plenty of opportunities for very tuned-in marketeers and agencies to figure out how to cut ahead.“

Why children are key to Lifebuoy achieving its handwashing goals

Snapchat Spotlight explored: ‘A clear departure from its origins’

Homebuilders pause media as Americans move out of major markets

What consumers and marketers can expect from 5G

With stores and salons closed, Coty puts a new face on innovation

The 5 hottest advertising trends for 2021

Retail bounces back in Q2: how marketers can make the most of it

Can marketers restore trust and transparency in agency relationships?